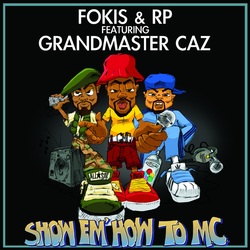 Fokis & RP team up to create The Vintage Album.

The Vintage album is scheduled for release in April 2015 and features Hip-Hop legends Kurtis Blow, DMC, King sun, Brand Nubian, Kool G. Rap, Spoonie Gee, King T, MC Eiht, N.O.R.E. and more. Created with two purposes in mind, “The Vintage Album” was intended not only to salute Hip-Hop’s pioneers but also to re-create the sound and feel of the early 80’s through the mid 90’s.

As the executive producer, Fokis took great pains to capture the authenticity of the music as sonically and accurately as possible. Every rap legend got matched with a new track that captured the spirit of their sound perfectly. The result is a beautifully crafted, collection of hard-hitting, rhythmic songs that still represents today’s generation in Hip-Hop.
credits.